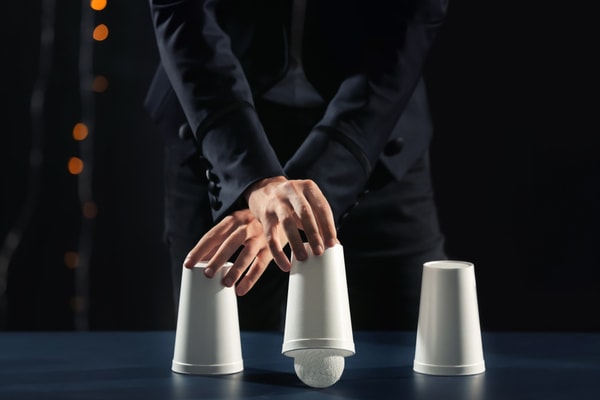 The evolution of magic

Magic as entertainment has been around for thousands of years. The first evidence that people performed magic tricks is an ancient Egyptian hieroglyphics from the tomb of Beni Hasan which appears to depict someone performing the cups and balls trick. It’s a trick that has become a standard for almost every magician even thousands of years later.

Fast forward to the 15th and 16th centuries when the Penns and Tellers of the time brought out books showing how magic was done. In his 1584 book ’The Discoverie of Witchcraft’ (published nearly 200 years before Dr Johnson popularised the dictionary), the English gentleman Reginald Scot described sleight of hand magic tricks in an effort to debunk the fear that people were channelling the supernatural, and disprove the popular belief in witchcraft.

In the UK, magic was commonly performed at travelling fairs – it wasn’t until the 19th century that it transferred to the stage. Then along came Harry Houdini, a particularly successful self-publicist who went on to become the world’s first international celebrity.

Although Houdini is best known as being an escapologist, he began his career doing magic tricks. After the death of his mother, Houdini used his magic skills to help expose fraudulent psychics and mediums, debunking their methods and, like Scot before him, disproving the existence of the supernatural. A lot of this was done at séances themselves, but he also showed their methods as part of his stage show in order to demonstrate that it’s all smoke and mirrors.

The advent of television provided a further boost for magicians. Huge audiences were able to get even closer to close up magic, enabling magicians to gain even more admiration for their ability to amaze with sleight of hand and distraction. Television magicians became celebrities in their own right, and names like David Nixon, Ali Bongo and Tommy Cooper became UK household names in the 1950s and 1960s, and Paul Daniels in the 1970s and 1980s. Today’s viewers are more familiar with the less overtly showbizzy likes of Derren Brown and Dynamo who devise their trickery primarily for the television rather than the stage.

Debunkers have also become very popular on TV, with the American duo Penn & Teller leading the way. However, by doing this, they’re arguably enhancing the reputation of magicians by showing just how difficult it is, and that to do it well requires a huge amount of skill.

All this goes to show the enduring popularity of magic as an art form. The performances and patter may change with the times, but there will always be an audience willing to be astonished by our sleight of hand.

If you would like to hire Christopher for an upcoming event, please get in touch or give him a call on on 07747 141 238. Alternatively, see the FAQs page to answer any questions you might have.