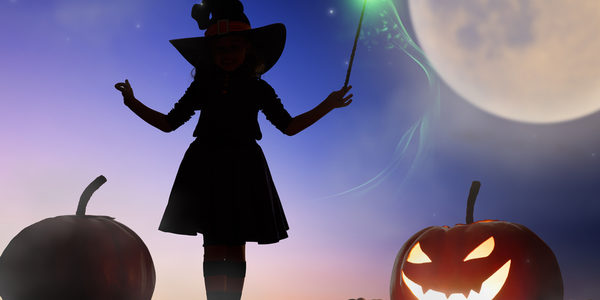 Hallowe’en has always been a spookily magical time of year, and its origins go back thousands of years.

The pagan Celts believed that on this night, the veil separating the living from the dead became very thin allowing the dead to return to eat with their families, so they produced feasts, adding an extra place setting for their ancestors’ spirits. When the Romans conquered Britain, they merged their own festival of the dead, Feralia, where they appeased the departed with offerings on their tombs, thus preventing them from haunting the living. Christianity then added to the mix by marking 1 November as All Saint’s Day, a hallowed day – which is why 31st October then became known as All Hallow’s Eve.

Traditionally, on Hallowe’en, lanterns were carved out of turnips to celebrate the Irish legend of Stingy Jack, who was punished by the devil by having to wander the earth lighting his way using a candle inside a hollowed out turnip. The Americans realised that pumpkins were a lot easier to carve than turnips which is why pumpkins became the popular option – an imported Hallowe’en tradition no Brit has ever complained about!

Add some real magic to your Hallowe’en party

If you’re planning a big Hallowe’en party next month, it’d be a great idea to add some magical entertainment to make it even more fun. Maybe you’re organising your university’s Hallowe’en Ball – magic is a great way to bring students together and get them talking to each other. If you’re celebrating a big birthday on the magical night itself, you’ll want to do something special, so why not add even more magic?

Here are a couple of suggestions as to ways I could help give your party the Wow Factor. (Although given this is the spookiest day of the year, perhaps that should be the Woo Factor!)

There’s nothing better than ‘working the room’, performing close-up magic to small groups of people at parties. Have a look at my videos to see for yourself what a good idea this can be.

I’m often asked to do one-off magic lessons for groups of people who then go on to wow their friends and families at their own parties. I make sure my lessons are a lot of fun as well as giving you some brilliant new skills. Contact me to find out more.

If you would like to add some spooky magic to your Hallowe’en party, call me on 07747 141 238 to check my availability and rates.